Faragonda is the Headmistress of Alfea College for Fairies, of which she was once a student herself. She played a major role in helping Bloom to discover her past and her true powers. Faragonda was also a member of the Company of Light.

Faragonda is possibly an elderly fairy judging from her hair. She has short curly hair and gold hoop earrings. She also wears black horn-rimmed glasses with sky blue lenses. She wears a long sleeved pink shirt with ruffles at the tips and a navy blue vest with a white trim, puffed sleeves, and a single violet button. She wears a long pink skirt with ruffles near her ankles. Her shoes are black high heels with yellow buckles.

From Season 6 onwards, she wears a dark blue jacket with a lavender tie, the same dark pink brooch, the lavender skirt is now straight instead of having waves, lavender gloves, white socks and the black high heels with yellow flowers on it. With its appearance, she is seen slightly less old due to its 100 years in existence.

Season 6 and Season 7 Outfit.
Add a photo to this gallery

In her younger years, she has brown hair and she was seen wearing a burgundy long sleeved and knee length dress and high heels. The neck part of the dress has white lace and a dark burgundy loop. The high heels have a golden buckle. The school logo's golden "A" is on the left part of the dress.

She wears a cream-colored dress, white sandals and a gray robe with white part (resembling a coat).

When she was a member of the Company of Light, she was much younger than Griffin. She wears a purple coat and integral light magenta dress with light magenta shoes. She seems to be 40 years in that appearance. 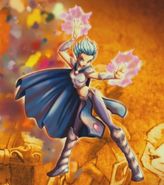 Faragonda is a kind soul who cares for her students, but she will not put up with nonsense and will dispense discipline when needed.

Her relationship with Griffin, the Headmistress of Cloud Tower, is a strange mixture of true friendship and slight rivalry. However, Faragonda was not present during the final battle with the Witches as all the magical strength of most of the members of the Company had been exhausted, which is why she was not able to tell Bloom exactly what happened to her parents. Faragonda was friends with Bloom's parents, King Oritel and Queen Marion of Domino (also members of the Company of Light), and was deeply disturbed by their disappearance.

Faragonda is one of the three points of magic, the other two being Griffin and Saladin.

Faragonda was once friends with Griffin. Faragonda, Griffin, and Saladin were part of the Company of Light that protected Domino along with Oritel and Marion, Bloom's parents.

Faragonda was never shown to transform, and it is still unknown what her exact power is. However, it was revealed that she was, at least, an Enchantix fairy (according to Griffin). Her element seemed to be nature-related, given how her spells are usually green-colored.

Hence, despite her age and her kind demeanor, Faragonda is still an extremely powerful fairy whom none should underestimate.

Retrieved from "https://winx-club-and-my-version.fandom.com/wiki/Faragonda?oldid=907"
Community content is available under CC-BY-SA unless otherwise noted.